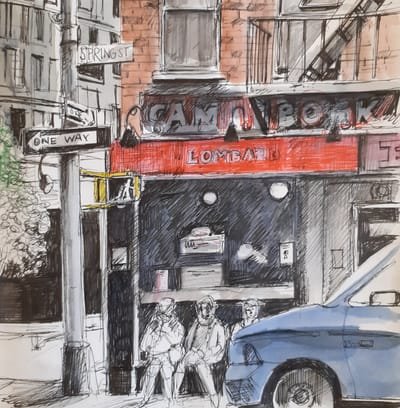 Hornsea Pottery book
Great News. I have just been commissioned to write a book on Hornsea Pottery based in East Yorkshire. I first went to Hornsea in 1976 on a school trip.

Hornsea produced some of the most innovative and creative ceramics for the British Pottery Industry over thirty years. The main designer was John Clappison, who featured in one of my other books, was the designer that brought Hornsea to the forefront of British design with his new shapes, printing techniques and understanding of the market.

Hornsea Pottery, whilst not known by some collectors of twentieth century design, has a growing and dedicated collectors group. Watch this space.

Lockdown Update
During lockdown in 2020 Andrew produced one drawing a day from his flat of the views around him including roof tops, houses, delivery vans and bins. These A5 studies, using a range of different media, will be displayed at the forthcoming Works of Paper exhibition, organised by the Ipswich Art Society, at ARTSPACE in Woodbridge from Thursday 28th October to Wednesday 10th November. All these drawings, several in colour, will be for sale for about £50 each with all proceeds to the the NHS.

Andrew Casey
Studied at the Leeds College of Art and the University of East London
Andrew is a practicing artist and has exhibited his work both in London and locally at the Denis Taplin Gallery in Woodbridge, the Pond Gallery in Snape and the Upstairs Gallery in Beccles.

He has been associated with the Ipswich Art Society (est. 1874) since the mid eighties and is an Honorary Member. In 1987 Andrew formed the Young Blood group to promote the visuals arts created by young people

Andrew is a well established author on the subject of twentieth century design chiefly ceramics and textiles.

He has curated several exhibitions including Susie Cooper Productions at the Ipswich Museums and Galleries in 1989, Dynamic Designers at Croydon Town Hall in 1999 and the first Susie Cooper Auction at Christies South Kensington in 2002

He has written articles for several magazines including Mid Century Modern, Antique Collecting, The Lady, Collect It and the Decorative arts Society

He has written several books on the subject and lectured in several prestigious venues such as the Victoria and Albert Museum, the Royal Society of Arts and the Morley College in London. In 2004 he was invited by the Ceramic Society of New South Wales to lecture on the subject of twentieth century ceramics at the Power House Museum in Sydney and the Royal Melbourne Institute of Technology.

His book, Twentieth Century Ceramic Designers in Britain, was awarded the Besterman/McColvin Gold Medal for the most outstanding work of reference, published in 2001, by the Chartered Institute of Library and Information Professionals.

His latest book Lucienne Day: In the Spirit of the Age, published by the Antique Collectors Club, was launched at the Fashion and Textile Museum in London in 2014.

Andrew has collected the work of ceramic designer Susie Cooper for over thirty years. In February 2020 he appeared on a Japanese television programme discussing the work by Susie Cooper and his own collection.